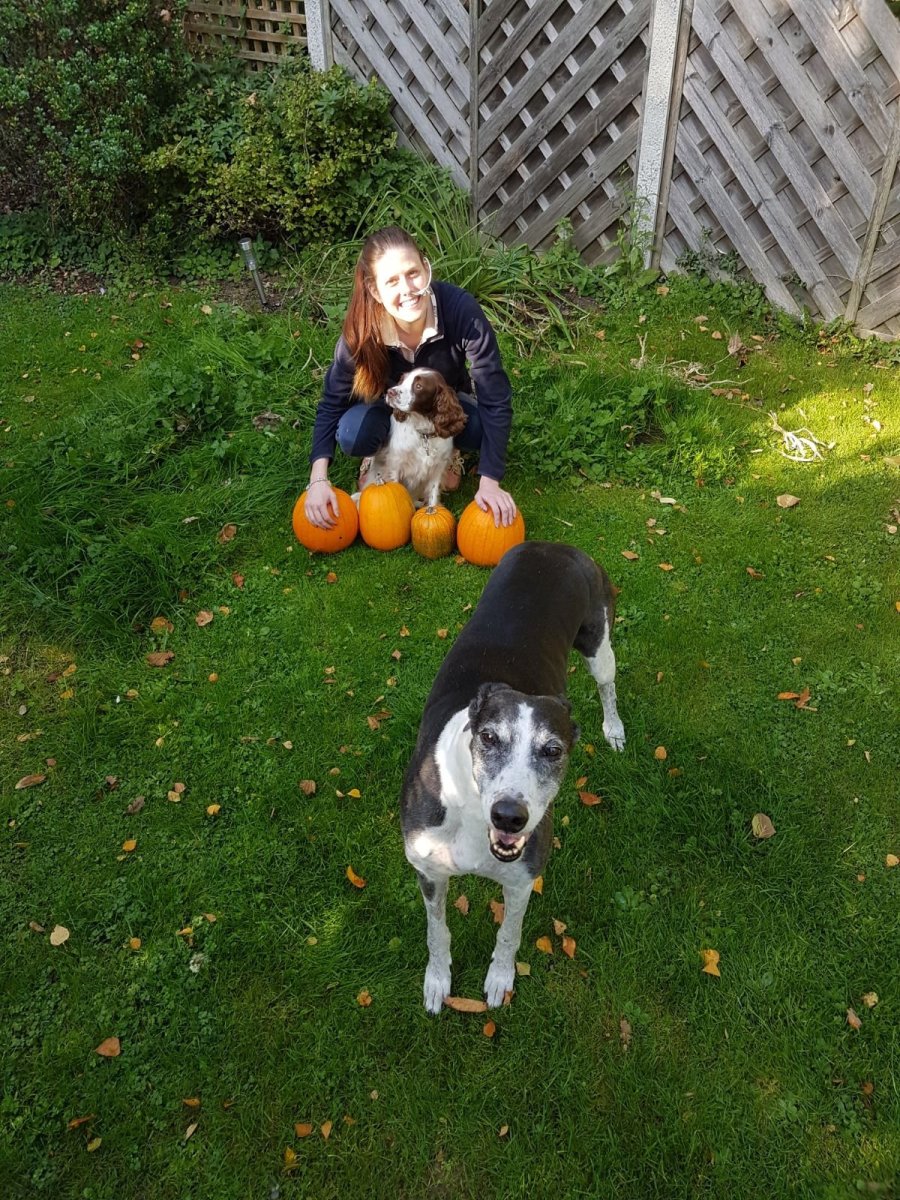 Yesterday started out fabulously with a cheeky little trip to the Food &  Craft fair at Cressing Temple Barns with fantastic friends! There  were so many an amazing treats and goodies as well as some beautiful birds of prey. Unfortunately there wasn’t any Fresubin based yumminess for Norman, but we did find some muttilitious muffins for Chip, Willow (Ash’s pooch) and Tilly (Holly and Russell’s canine).

On the theme of hounds……..we went over to Holly and Russell’s that evening for a movie night!

After all that excitement I was exhausted……..so who spent the night with me……none other than party pooper Parasitic Pain!!!! Cheers PAS!

But there was no time to lay around being miserable because it was pumpkin picking time! The closer we got to those brilliantly bright pumpkin presents the more excited I became! In fact……the pooches were feeling pretty waggly too!

We chopped one up in what could only resemble a prize producing pumpkin parlour!! 4 tubs!!!! The freezer is stocked! Don’t worry……..Im saving the other 3 for crazy cooky carving At Halloween!

Now it was Sunday afternoon……that can only mean one thing…….Spirit time!!!! We went for the most wonderful walk around the farm. The sun was shining, the air was warm with a crisp undertone and we were ambling through the countryside with the birds signing in our ears. Nothing could spoil this picturesque perfectness……….until we hear rustling…….and who appears from the brambles? Willow!!! Although it wasn’t the Willow we saw disappear amongst  the thorny BlackBerry producing foliage. It was as if she had met some kind of hungry swamp creature that had coated her in thick black sludge that resembled black treacle with the aroma of wildlife sewage! Literally in a matter of seconds she had turned from the cuddly cute faced pooch we all know and love into a swamp creature from Scooby Doo!

Thankfully, after some vigouros scrubbing with Teatree and Mint shampoo the beautiful spaniel reappeared. Transformed like a butterfly emerging from a cocoon!

Then we come home to mum’s homemade BlackBerry and Apple gluten free crumble. All in all……a pretty wonderful weekend!. Hopefully my PAS pals will leave me be tonight as I’ve got my flu jab in the morning. Need to keep my strength up!

I hope you’ve all had as giggly waggly weekend too…….or at least found something to make you put a smile on your face and give you that warm glow inside.

A bit about PAS

I have Polyglandular Autoimmune Syndrome Type 2.
Polyglandular autoimmune syndrome (PAS) is made up of a group of autoimmune disorders of the endocrine glands. The syndrome results in failure of the glands to produce their hormones. There is about 1.4-4.5 per 1,000,000 people with PAS.
Stages in the development of Addison disease.
1) Adrenocortical function is lost over a period of years. In the first stage, genetic predisposition is conferred through human leukocyte antigen (HLA) genes.
2)In the second stage, unknown events precipitate anti-adrenal autoimmunity. 3) In the third stage, which involves presymptomatic disease, steroid 21-hydroxylase autoantibodies production predicts future disease.
4) Finally, overt Addison disease develops.
Other common diseases:
Celiac disease
Graves disease
Hashimoto thyroiditis
Type I diabetes mellitus
Abnormality of the musculature
Alopecia
Hypogonadadism
Hypoparathyroidism
Hypopigmented skin patches
Early identification and treatment of another autoimmune endocrine disease may be critical and even life-saving. Currently, management of these disease is restricted to the pharmacological replacement therapy. However, progress in understanding the inner immunological mechanisms implicated in these conditions, should allow common treatments aimed to prevent or at least dampen the progression to irreversible multiple organ damage.
Compared with the background population the risk ratio for death is more than 2-fold higher in patients with Addison’s disease.
Some information taken from:
www.ncbi.nlm.nih.gov
emedicine.medscape.com
academic.oup.com